MVP is a volunteer-driven project with articles by Brian Kozak/Glen Dawkins and pictures by Jim Harvey. 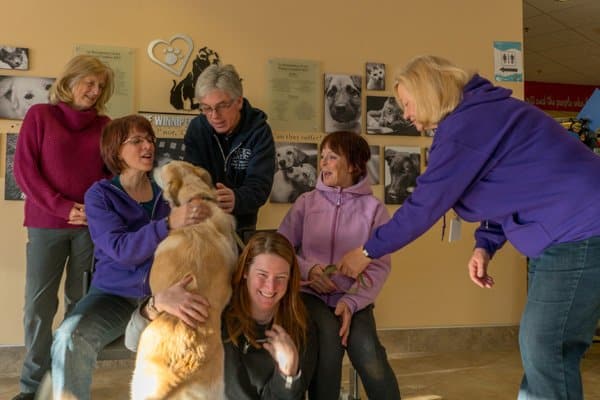 The dog yards in the rear of the Winnipeg Humane Society building play an important role by giving the shelter dogs a place where they can learn to thrive, re-learn the joys of being a dog and what it’s like to feel love to prepare them for their forever homes.

A dedicated group of volunteers behind Project Dog Yards – Gabrielle Thiessen, Margaret Krupa, Stacy Wilson, Gerri Weigle and Karen and Paul Long – are working to improve that experience. Since starting fundraising last summer, the initiative has raised over half of a $30,000 goal to upgrade and rehabilitate the dog yards.

“For the dogs in the back, the yards are their only opportunity to get out and get some exercise, have the volunteers and the behaviour staff interact with them,” said Thiessen. “The yards are very important for these dogs.”

“We used to joke that we came here to get our weekly muddy facials by taking the dogs out,” said Thiessen. “They would be just covered in mud and that affected them when they came back indoors because that meant all the hallways and their kennels would be just covered in mud. It was sort of obvious to a group of us that something needed to be done to rehabilitate the yards.”

“If it was just mud and puddles, we would have continued to put up with it but there were genuine safety concerns,” added Wilson. “Dogs were injuring themselves by tripping and spraining and we’d see cuts in their mouths.”

After meeting with CEO Javier Schwersensky to express their concerns, the group set out to do something about it. They set up information tables in the WHS lobby and at events such as the WHS In The Ruff golf tournament at Breezy Bend and at the Winnipeg Pet Show to promote Project Dog Yards and accept donations from the public.

While they are still soliciting donations to reach the $30,000 goal, work has already started to upgrade the dog yards. The fences have been repaired and the grass replaced with stone and ground river rock which is easier to keep clean and help prevent the spread of disease and bacteria. Pressurized hoses run from the kennels to help in the cleaning process.

“The dogs won’t be standing and splashing around in the mud when they’re playing,” said Karen Long. “So this will give them an easier chance to play and not be filthy.”

“If they can get out there and spend as much time as possible, the much better it is for them,” added Paul Long. “That’s what we’ve tried to achieve with this entire project. The whole idea driving behind it was to improve the quality of the yards for the dogs so we can spend more time with them and work with them on a one-to-one basis.”

Much of the fundraising was done with a simple message: If this was your backyard and your dog, how would you feel and what would you do to make it better?

“Most of our fundraising was done throughout the summer and the message is to think about when you’re out in your backyard having a barbeque and watching your dog stretching its legs and having a good time in the sunshine,” said Weigle. “You need to think about the difference it makes to the dogs here.”