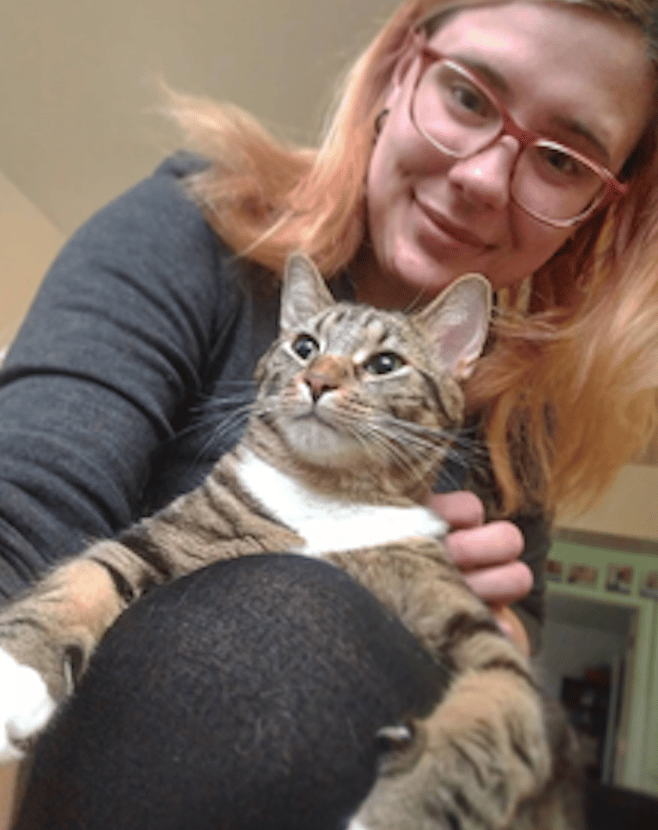 Like many other volunteers at the Winnipeg Humane Society, Heather Tataryn decided to begin her volunteer role after adopting her cat, Bijou, at the WHS.

“In October 2017, I hadn’t owned a pet for a few years because my best friend, whom I’ve known since before elementary school, has allergies to these furry felines,” she explained. “But I had recently looked after a friend of a friend’s cat and after that I knew it was time for me to welcome one into my life!”

So Heather came to the WHS and fell in love with every single rescue cat at the shelter in one day, ‘searching for the one cat that I knew would capture me.’ Her only prerequisite was size – she’d ordered a backpack cat carrier, so average or small cats would be easier to take on adventures together. While still at the shelter, Heather and friends checked out the WHS website and Bijou’s photo captured her heart.

Heather was bound and determined to meet Bijou, so she headed off to the Petsmart satellite location on Leila. The store was just about to close, but the staff let her meet him anyway. That was all it took. “They opened his kennel and he pushed his head into my hand, and in that moment, I knew my heart melted and my search was over,” she said. “I knew I’d be coming back in the morning to adopt this green-eyed goon.”

Heather was back at the store the following morning. She spoke with the staff about adopting Bijou, picked up what she’d need for him at their new home together and then waited while Petsmart staff and WHS Adoptions staff finalized the adoption.

“It was the process which I went through in order to adopt Bijou that made me consider volunteering,” she explained. “It made me feel that they really cared about the animals and wanted to do right by them. I brought Bijou home on the afternoon of October 8, 2017.”

Early in 2018 Heather attended a Volunteer Orientation Session and courses on Cat Safety and Pet First Aid.  Originally, she was going to take a position where she would help match up pets and people who would be a good fit for each other. But her regular job involved a lot of contact with the public, so Heather thought something behind the scenes might be a nice change. She got a placement as a Shelter Supply Organizer and started that September.

In this job, Heather sorts through donations, figuring out where each item needs to go within the shelter. “My tasks include emptying the donation bins from the front of the building, organizing the food room, unfolding and stacking paper, and taking donated items to their proper place within the shelter.  Before Covid, I would come volunteer two or three days a week, usually for a duration of two to three hours each time,” she said.

The work is enjoyable, she indicated, and it’s rewarding knowing that you’re helping out both the organization and the animals that are up for adoption. And while Heather mostly works on her own, she has developed friendships with other staff and volunteers with whom she’s crossed paths. Volunteering at the shelter also allowed her to meet a second cat whom she adopted in February 2020.

“I met a kitten named Reeses Pieces, who was recovering in one of the back rooms near the hallway where we do most of our organizing,” Heather said. “I asked Oliver, a friend I had made at the shelter, if he could tell me about her and if I was allowed to visit her.”

Heather learned that the kitten had had an accident and was recovering in the shelter from surgeries. “After that I went and sat with her, and had pretty much decided I was going to adopt her. But this adventurous six-month-old kitten still had a couple weeks left in foster care to heal and that gave me enough time to find a more suitable name for her. I found out when she was supposed to be back and asked for her to be put on hold for me. I marked it in my calendar and waited, trying to be patient, but I often checked the WHS adoptions website just in case. A couple days before she was supposed to be back, I saw her there!”

“Reeses Pieces” was adopted and taken home by Heather and became “Babita,” which means ‘foreign woman’ in Latin. Heather managed getting the two cats used to one another. Not long after adopting the kitten the pandemic arrived in Manitoba and Heather’s work and her volunteering were both put on hold.

Heather’s always had a special place in her heart for cats. When she was little, her Mom loved watching birds in the yard and was anxious that the birds would disappear if they got a cat. Then one day when Heather was about nine, Mom came home with a stray white kitten with a grey spot on its head. They named her “Ice”, and she became the first of several pet cats Heather had while growing up.

It’s a reputation her family has constantly reminded Heather of. “Growing up, I was teased by my family that I was going to be a stereotypical crazy cat lady when I got old,” she laughed. “In the beginning it bothered me but for whatever reason cats just bring me so much joy that I’ve accepted that that might be my fate!”