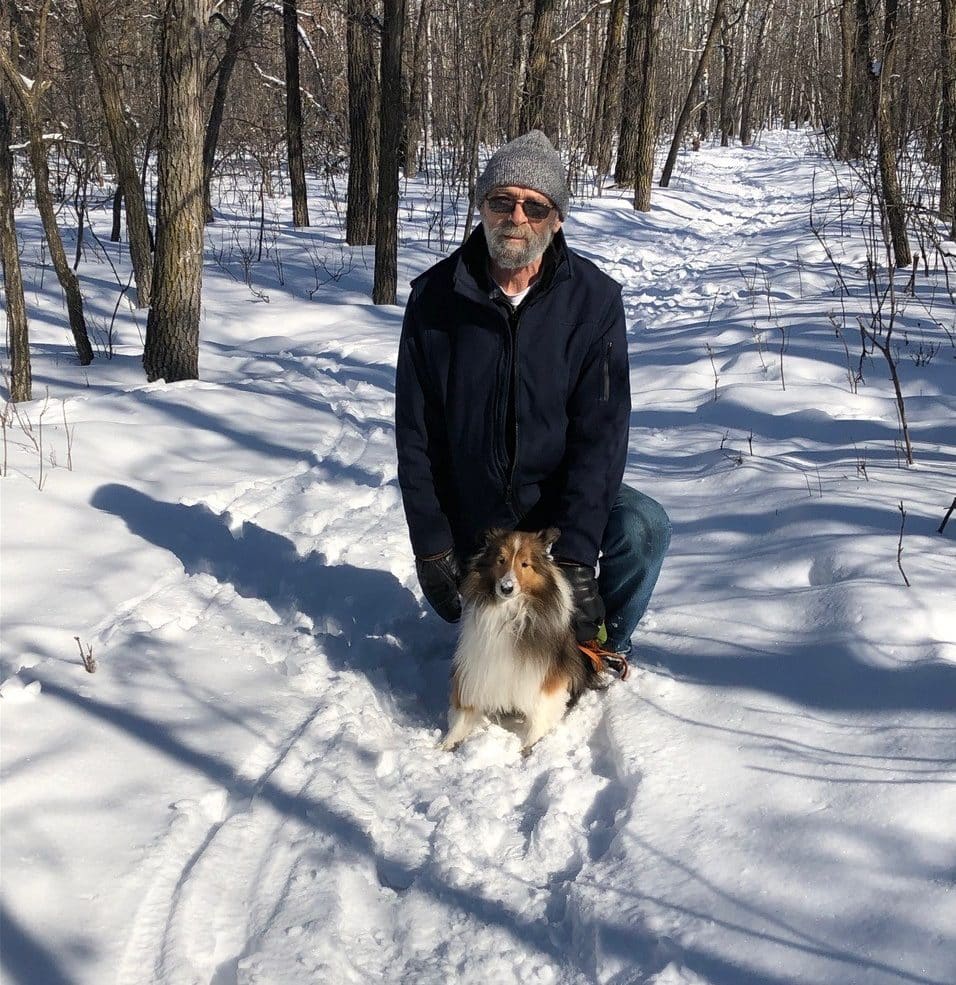 Three years ago David Ward brought his life-long love of working with animals to the Winnipeg Humane Society, a relationship that’s brought a great deal of joy to people, both young and old.

A retired Conservation Officer with the Manitoba government, David spent his career in offices throughout the province, working with hunters and with wildlife. “I always liked working with creatures,” he said with a smile. And at home David’s had his share of animals: “We’ve had lots of cats over the years. And we’ve had dogs going back to the 1970s,” he explained.

When he became a Winnipeg Humane Society volunteer, David learned about the Dog Ambassador program. “We came here and needed something to do and we had Gryff (a Sheltie) who we knew was a very smart dog,” David said. “We brought Gryff here and did all the checks for him and a background check for me so we got on as a Dog Ambassador. So it’s worked out really well. He enjoyed it so much and I’ve loved it too.” David said Shelties’ intelligence and good temperament made them a good fit for the job.

For three years, David and Gryff went to city schools and worked with special needs children. And once a week they visited with seniors at Golden Links Lodge in Winnipeg. They also participated in the See Spot Read program. All told, the pair usually spent two or three hours a week as ambassadors for the WHS. “The kids liked Gryff a lot and when we went to Golden Links Lodge the seniors’ faces lit right up,” David explained, “Gryff loved to be cuddled, so he fit right in with the seniors.

‘What always struck me is how well Gryff related to the people he was seeing,” David continued. “He got so much out of it and they got it from him as well. He was also a very calming influence, especially with the special needs kids.”

David also figured Gryff looked forward to visiting. “You could tell he knew when he was going to the Lodge,” David said. “When we pulled up he perked right up and would go trotting in and greet all the staff. And there was never a shortage of people wanting to cuddle him.”

Sadly, Gryff passed away this fall at the age of 13-and-a-half years. Since his passing, David has adopted a couple of cats from the Humane Society. David said there are no plans to get another dog at this point. In the meantime, he’ll continue volunteering in some capacity.

The work of David and Gryff will long be remembered and appreciated by the Humane Society. “David is a very dedicated volunteer and it has been really great working with him!,” said Kendra Galbraith, WHS Assistant Manager, Education. “He never hesitates to help out with whatever we throw his way, from participating in our See Spot Read Program, visiting the kids at our day camps, and spending time with the residents in nursing homes. David and Gryff have held a huge place in the Education Team’s hearts; Gryff will be missed by all staff and fellow volunteers. “