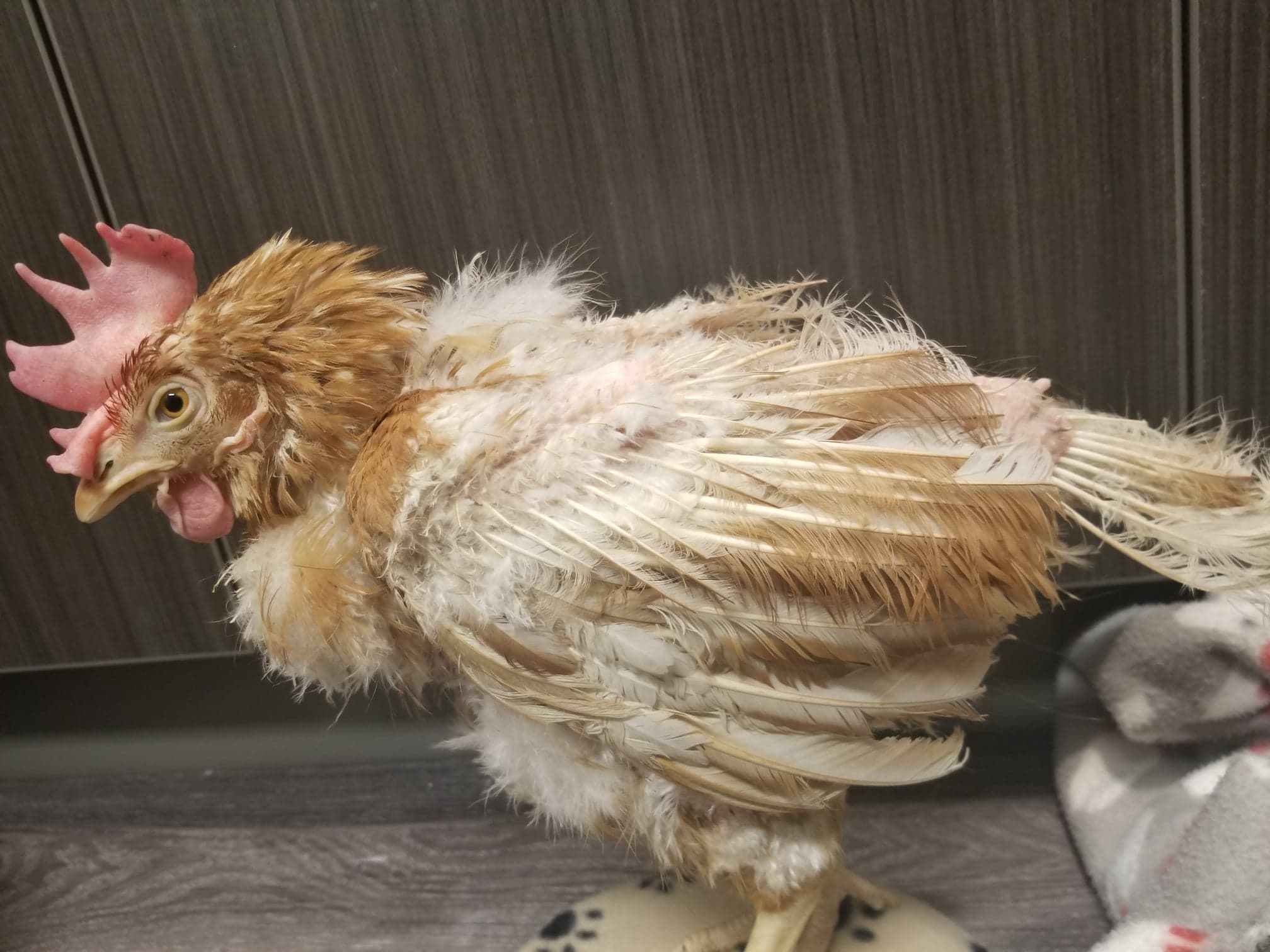 Pearl is an egg laying hen with severe feather loss and quite the tale to tell.  Pearl and four other hens were found clinging to life, on top of thousands of already dead hens at the Brady landfill on April 1st, 2021, approaching Easter Weekend.  The hens were spotted by kind-hearted workers who alerted The Good Place: Farm Rescue & Sanctuary.

To understand why Pearl was discarded at the dump, despite being fully conscious, it is important to first acknowledge some of standard procedures and policies within industrialized egg laying barns.  In such barns, including free run barns, it is industry standard to cull the entire barn of hens (often thousands per barn) when egg production drops below 90%.  The mass killing of young healthy birds takes place, and then a new batch of hens is brought in to replace the old ones. This is done as a means to prevent profit loss – the cycle continuously repeats itself.

Of course, this isn’t the first time Manitoban hens have survived a mass cull, or the trip to landfill while thousands of other dead hens are piled on top of them. Last summer, two other spent hens were spotting flapping their wings on top of thousands of their dead cage mates, when they were spotted by the very same workers who found and worked to save them.

Will we ever know how many chickens are buried alive at the Brady landfill? Probably not, but watchdog workers note that it happens far too often. There were likely more than the 5 hens found, who survived the mass cull, however they weren’t lucky enough to be at the top of the pile.

Hens like Pearl remind us that we as Canadian citizens have the right to know the truth about how animals are being raised and treated on industrialized farms.

It is important to know that the term ‘free run eggs’ does not mean that egg laying hens have outdoor access, or any ability to roost or forage. It only means they are not in battery cages. They are routinely housed in large barren barns by the thousands and killed in mass culls just like battery cage hens – they too can suffer severe feather loss, prolapsed cloacas and broken bones from severe calcium depletion. 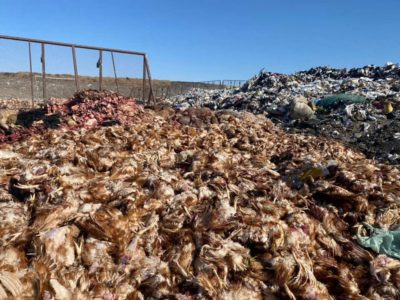 Pearl and her sisters are the lucky ones. Out of the millions of egg laying hens across North America that are culled and discarded once egg laying decreases, they have defied all odds and have now found forever refuge. They will feel the earth and grass beneath their feet for the very first time and will have the opportunity to bathe in the sunlight, flap their wings, forage, roost and live comfortably, as all chickens should.

The Winnipeg Humane Society urges supporters to look beyond labels on egg cartons and understand that ‘free run eggs’ does not always automatically equate to humane welfare for laying hens.  How can you help?  Seek egg alternatives, or purchase eggs from farms that are open and transparent on how they raise chickens and allow you to visit the chickens.

Join us in saying no to ag-gag Bills 62 and 63 and ask your MLA to continue to oppose these Bills. Transparency is best practice.