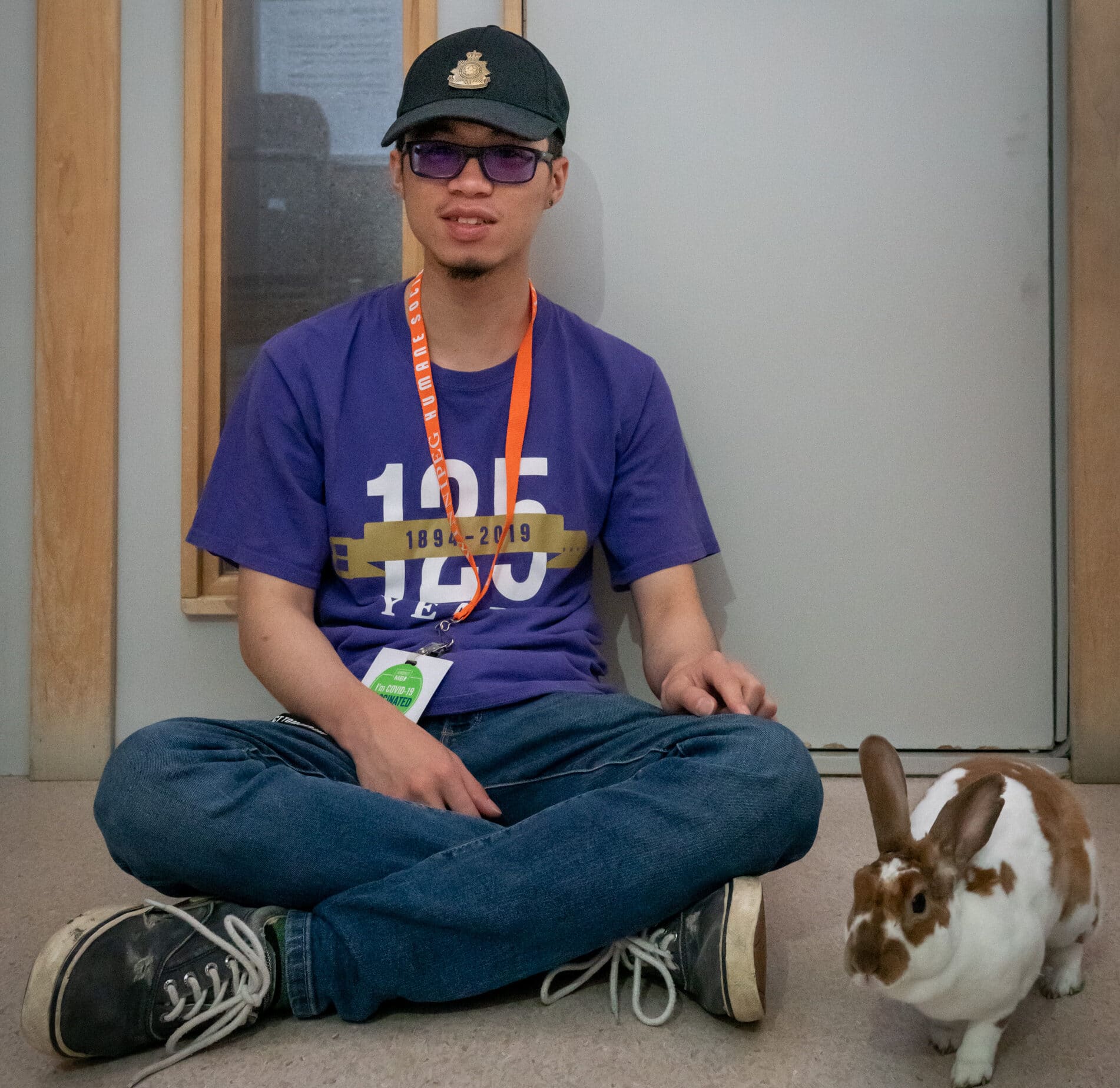 “For me, it’s kind of an affinity. In the Chinese zodiac, I’m a rabbit,” he explained. “So, when I first applied to volunteer, I saw there was an opening for bunnies so that’s what I chose. I would’ve liked cats or dogs too. I like all animals.”

Wilfred began volunteering in 2018 and has always been a been a rabbit wrangler. “I came to Canada in 2017 and I was looking for something to fill a gap in my life,” he noted. “I was settling in and I wanted something to help me get into a routine. We were living nearby and I learned about the Humane Society. So, I came here to volunteer” In the rest of his time, Wilfred is a university student and works at a hotel as a shuttle driver.

“Working with the rabbits is a great way of de-stressing,” he continued. “Each week I get two hours to myself to watch over the rabbits and answer any questions that visitors to the rabbits may have.”

Five types of rabbits are native to Canada: the Arctic hare, the eastern cottontail rabbit, the snowshoe hare, the whitetail jackrabbit and the mountain cottontail rabbit. But most of the rabbits at the WHS are specific breeds for raising as pets, including ones like the Flemish Giant, the Rex, the Harlequin, the Lionhead and many more. These domestic pet rabbits should never be released into the wild.

Working with the bunnies has allowed Wilfred to learn more about the individual breeds, their characteristics and their behaviors. He seems fascinated by their behaviour. “They’re restless and inquisitive,” he pointed out. “Sometimes when they are bored, they’ll tear up the newspaper in their beds or gnaw at their wooden pens.

“They’re curious and that’s part of how they explore – by chewing and sniffing. And they rub their chins against surfaces to mark their scent.”

Each rabbit has its own character, but he prefers rabbits over other pets because as prey animals they’re more ‘chill’ and less intense. “You see with dogs that they can be excitable or aggressive,” he said. “Bunnies are, for the most part, very calm. They just go around on their own exploration. They like affection but they won’t go up to you and lick your face.”

“Rabbits tend to stay longer at the shelter than dogs or cats,” Wilfred explained, “because as prey animals they’re less trusting and slower to get used to people. That’s why exploration time is valuable for each of the rabbits, giving them an opportunity to get exercise. Only one rabbit is allowed out at a time for exploration time, unless two rabbits have come into the shelter together.”

Unlike many Winnipeg Humane Society volunteers, Wilfred didn’t develop a love of animals by having pets as he grew up. A family member was once bitten by dogs, so they had no pets (other than one tortoise). So, he had to admire animals from afar.

He almost adopted a kitten recently, but while he was considering it, the animal was adopted. So, for now, he’ll keep getting his animal fix at the shelter. The bunnies seem to make good company, and the feeling is mutual.

A group of volunteers founded the Winnipeg Humane Society in 1894 and are vital to our success today! With the help of volunteers, we can provide care, love and attention to our four (and sometimes two) legged friends until they find their forever homes. The MVP (Monthly Volunteer Profile) recognizes the work and gets to know these special MVP’s in a spotlight each month that includes an article and photo shoot. MVPs receive a framed photo and gift card as our thanks!