Laurie Marion may only be into her third year of volunteering with the Winnipeg Humane Society, but she has gained a wealth of experience in various roles in a relatively short time.

Currently a cat condo assistant and foster assistant, she’s also done dog walking and was a rabbit wrangler for more than two years. She’s also helped out with orientation tours and WHS events. 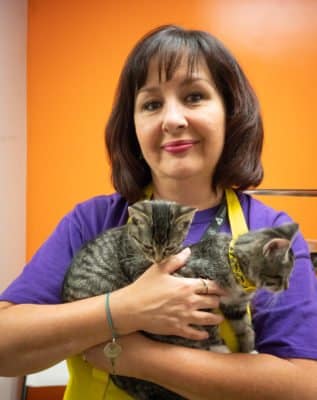 She enjoys working hands-on with the animals. “I started off as a cat cuddler and rabbit wrangler,” she explained. “I’ve always had cats so it was a natural for me to help out over there.

“But I didn’t know a thing about rabbits, so I thought ‘Why not?’ Surprising they I really enjoyed it. I loved the rabbits – they’re so awesome and so chill.”

Laurie says the timing was right for her to start volunteering. “Even with working full time and having a number of things on the go, it was important to me to give back.

“I’ve always considered animal welfare to be a top priority in my life and the timing was right for me to begin volunteering.

Laurie grew up with a dog but has always had cats. Currently she has four cats. “A while ago we had two cats,” she said. “I was doing my cat condo volunteering and there was this one kitten who caught my eye. He was just nine weeks old and I kept going back and back to him and I knew he just had to be part of our family.

“About half a year later my daughter (who lives in Montreal) sent her cat to live with us as her heavy work schedule did not permit enough time to care for her cat. She thought that he would love having three siblings to live and play with (and he does!).

“That’s how we ended up with four cats. But that’s enough – it can be a fair bit of litter box cleaning.”

Each of her current volunteer roles has its benefits. As a foster assistant, Laurie gets to work with kittens and puppies (and big ones too), preparing the supplies as they head out to their foster families who take these young animals into their homes for weeks or months. “I love the staff and the foster parents – they’re amazing people.”

Laurie laughingly says she’s a natural for the orientation tours because she admits she’s a bit of a talker. She likes the events because “generally they’re a lot of fun and you get to meet and interact with supporters and other volunteers. You get to know a lot of the other volunteers and staff, who are wonderful, caring people.”

Being a condo assistant is enjoyable, she said, because a lot of people come in and want to tell you their stories. They want to talk about the animals that they’ve had. Then when they find a cat that’s right for them it’s nice to share in their happiness.

But sometimes it’s a challenge as well, she added. “Once we had a woman come in who said ‘I only want a black cat.’ For whatever reason at that time there weren’t black cats in the condos, however, there was a super-friendly orange cat that I knew she would love if she gave it a chance so I asked her if she’s ever thought about having an orange cat? She said ‘no,’ very matter-of-factly. I asked if I could show her this orange cat.  She agreed eventually and a few minutes later this cat was all over her, giving her kisses and rubbing against her neck. Five minutes later the woman came out and said ‘I’m done. I’m taking this one home.’”

Being a WHS volunteer can also help you de-stress, Laurie added. “A couple of years ago my 18-year-old cat crossed over the rainbow bridge and four months later my Mom passed away,” she explained. “I found it comforting being here with the animals. I have my own, of course, but it was good to get out of the house, being with these animals that are looking for attention and affection until their forever families find them.“