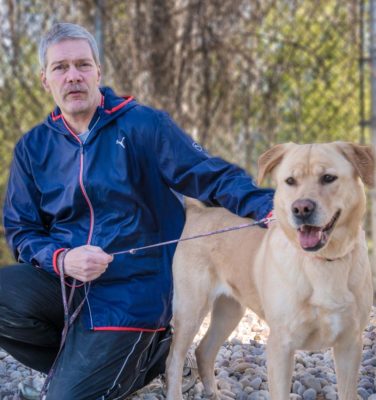 It was a love of animals dating back to his youth that got Mike Costello interested in volunteering with the Winnipeg Humane Society. But what could’ve been a tragedy changed his role at the WHS.

Mike began his volunteer role in 1993 assisting with WHS special events.  But at his seven-year mark he answered a call for help and it changed him. “The WHS had a very large seizure of animals. It was the year 2000 and they had probably the biggest seizure of animals in their history in the summer and a lot of them were dogs,” he explained. “It overwhelmed all their dog walkers at the time so they sent out a mass appeal to everyone who was volunteering to see if they could help walk these dogs. I did that about two nights and I was hooked.”

Mike’s now been a volunteer dog kennel buddy for 17 years and two nights a week you can find him at the shelter working with the dogs before they’re ready for adoption. “When they first come in, some of the dogs might have behaviour or health issues, so they are housed in the back of the shelter before they are moved into Adoption,” he said. “Some of them can be there for quite a while but we work with them to make sure they get some fresh air and exercise and lots of socialization.”

He’s worked with – and gotten attached to – thousands of dogs over 17 years but has resisted the urge to adopt or foster one. His cats at home voted it down.

He does, however, have a heart-warming memory of his volunteer service. “The first year I was doing this I fell in love with two dogs that were brought in together – their names were Bambi and Princess,” he noted “The staff were trying for the longest time to get them adopted out together but they couldn’t. They ended up getting adopted separately and one ended up going to one home and, soon after, the other went to another home.

“About two years later the first one originally adopted got returned,” Mike continued. “When she got returned, I remembered that her sister had been adopted to a separate home which the staff at that time didn’t realize. So I suggested that we find out where the sister went and see if they would be interested in getting the other one. We got in touch with this family and it turned out they didn’t know she had a sister. They were quite happy to take her and the WHS let me deliver her to her new home.

“The sight of those two seeing each other again after a few years apart was just incredible,” he said. “It took them a minute to recognize each other but when they did it was just sheer joy for them.”

His efforts are appreciated by his colleagues and the dogs alike.  “He works very hard and handles the dogs very well,” said fellow volunteer Don Bowles. “Mike is an excellent team player. He shovels out the kennel gates and makes sure the dogs get some treats and treats them very well. He always knows just how to manage even the most difficult dogs.”

“It’s a real pleasure to work with the staff and volunteers because of their dedication,” Mike said. “The Behaviour staff works very hard to get those dogs ready for adoption.”

He volunteers two nights a week as well as having a full time job, but can’t see himself slowing down anytime soon. “You fall in love with some of the dogs so it’s kind of hard to give it up. You get attached to some of them.”