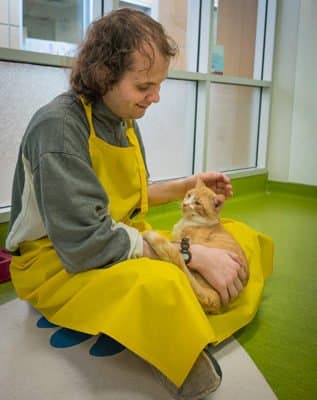 A life-long affinity with animals in general – but especially cats – made it easy for Nicholas Bennett to decide where to give back to the community.

The four-year Winnipeg Humane Society volunteer spends a couple of hours every Thursday as a rabbit wrangler at the WHS shelter and follows it up every Friday as a cat cuddler.

“I just love animals,” he pointed out. “So when I got in I decided I wanted to work with as many as possible. I was thinking about working with dogs too but I only have so much time. Unfortunately I didn’t have time to work with the dogs.”

Nicholas saw volunteering at the WHS as a good opportunity to work with animals. “It’s a good fit for me. I know the Humane Society does good work with the animals,” he explained.

Rabbits represented a bit of a learning curve, Nicholas said. “I hadn’t interacted with rabbits too much before I volunteered. What I’ve enjoyed about working with the rabbits is learning more about them as well as the other small animals such as the guinea pigs and the rats. With my volunteering I’ve been able to learn more about them and that’s been fun to do.”

There are clear differences between the two species, Nicholas explained. “Rabbits are more independent – they don’t like being picked up and held as much as other animals but they can still be affectionate. But they are still fun to work with.

“As far as the cats are concerned, I’ve always loved cats and I have always been around them, so when I had the idea to volunteer at the Humane Society I knew I wanted to work with the cats. I’ve always had pets but my first pet growing up was a cat so I’m very familiar with them.”

After four years of volunteering twice a week, Nicholas has fond memories of many animals – but Argyle stood out. “He was there for a good six months so every time I was there on Friday I made sure I went in to see him, Nicholas explained. “I loved him because he was talkative and such a character. I would talk to him and he would make different sounds back to me. It was like we were having a conversation.”

Nicholas said he has a soft spot for the older cats in the shelter because they tend to stay around longer. “I always tell people not to let age deter them from seeing a particular cat,” he said. “I had a cat that lived to be 25 and another that lived to be 21. You never know – if you treat them well and take care of them they can live a long time.”

Nicholas enjoys good two-way relationships with the staff and volunteers with whom he works – as well as with the cats and rabbits. “Nicholas is a very kind, sensitive and caring person,” said Lesley Mayer, a volunteer cat cuddler.  “He is excellent with all cats, but he is especially good with the frightened, anxious cats, as they respond well to him.  He is such a nice young man with something very special about him.  He is very friendly, personable and easy to talk with.  He has also given me some really sound advice.  I think he’s awesome and so do all the cats that he cuddles.”