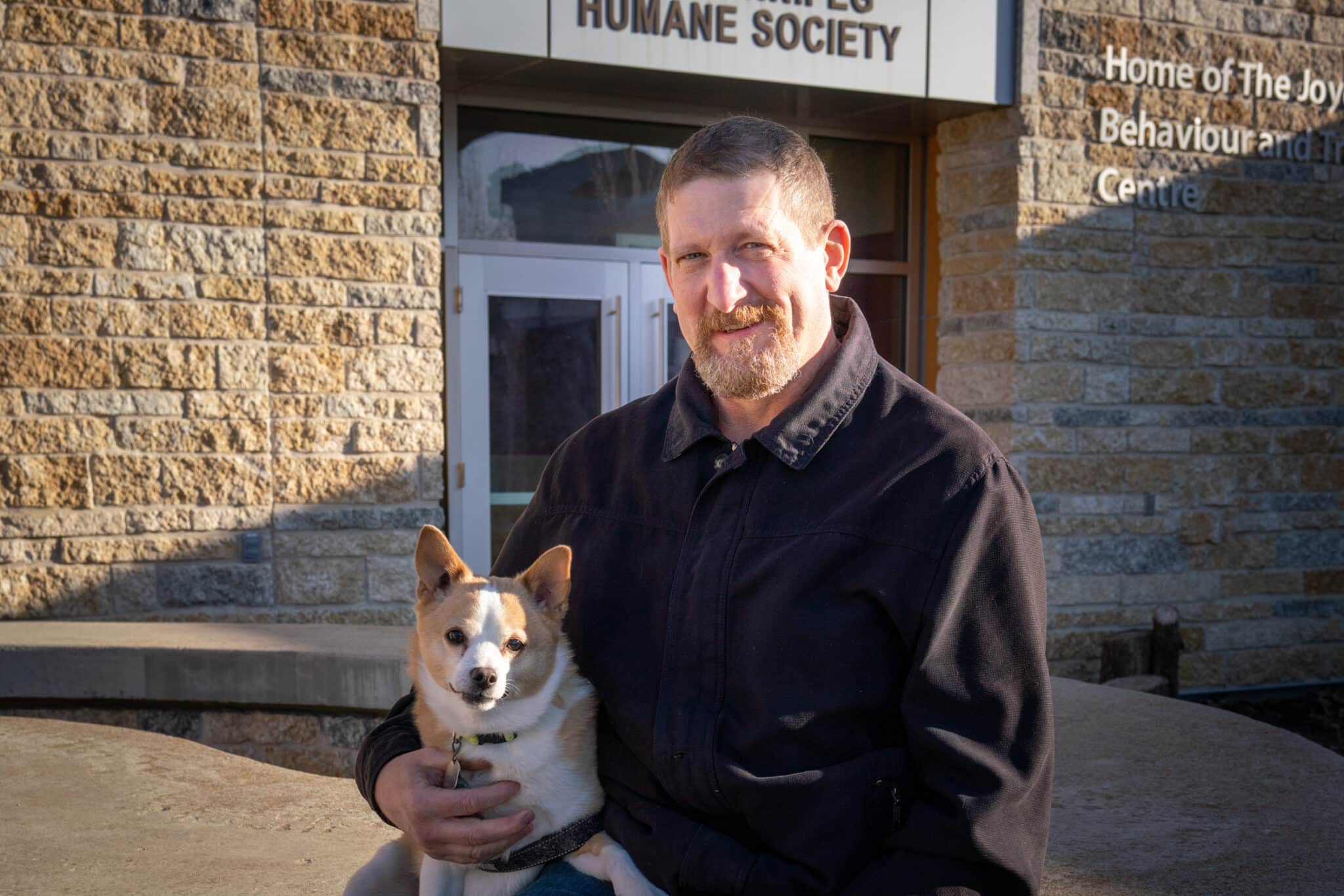 Steve Larocque was hospitalized for an extended time 2020, just as the pandemic was beginning its rounds. Steve put his time in hospital to good use, and many cats from the Winnipeg Humane Society have benefitted from it, as many more will in the years to come.

The Larocques decided to make a big-time commitment to fostering animals on behalf of the WHS. They had fostered both dogs and cats before, but now Steve was putting his carpentry and furniture finishing skills (he finishes furniture as a business) to good use, converting a spare room in their house into a space for foster cats in their care.

Steve came up with this idea on his own, Rosalie said. “A year ago in May, just after Covid broke out – he was hospitalized for a rare condition. He was bored. I wasn’t allowed to come see him, so he got on line and realized that we would be an ideal foster family for cats. He asked me about it and I said ‘sure.’ That’s how this idea developed. Our daughter had moved out, we had this spare bedroom, and Steve has always been the nurturer. I do what he says (laughs) and he makes lists. He is the ideal foster parent and I get cuddles from the baby cats, and I’m just a sucker for that.”

They’ve been foster parents off and on for about six years and have taken care of dogs, cats, puppies and kittens over the years, but last year decided to get into it full-time. They haven’t looked back.

Fostering for the Larocques is a partnership but they each have their roles. “We call Steve the primary fosterer and I’m the secondary so if we don’t agree about something regarding the cats, he’s number one. I’ll just go along with what he says – it avoids a lot of ‘negotiation’,” she laughed.

Rosalie has an administrative job with the Winnipeg Regional Health Authority. “I’ve been working from home since the pandemic took hold,’ she said. “What I especially enjoy about working from home is that our third bedroom is converted into a cats’ room with everything kitted out for them. We got a glass door installed instead of a wood door. If I’m not in the room I can look at the cats without disturbing them. And Steve built me a desk in the room and that’s where I have my office set up. So, I’m with the cats all day long.”

Steve is the son of a Canadian soldier and a nurse “So I grew up thinking that things have to be done a certain way, and I like to write things down.” Since starting, he’s developed his own PDF sheets for weights and other information about each of the cats in their care. Rosalie looks at the other things, Steve said. “While I’m looking at the grams and measuring things, she’s observing, getting the toys and making sure things are set up to make things more comfortable for the mom cats. I dot the I’s and cross the T’s and she looks after the other stuff, the things the cats might enjoy.”

Now you might think that someone with a by-the-book approach might be emotionally distant from the animals. Wrong – hard stop. “Rosalie tells me that I’m the one who picks up the animals and takes them to their appointments but she’s the one who drops them off. It’s easier to say goodbye to them at home versus some big guy trying to hold back tears when he drops them off at the shelter.” He had a hard time recently saying goodbye to Muffy – a cat that was being adopted right away by Steve’s brother. “Some animals attach to you and you attach to them real fast,” Steve said. “I knew that I’d be seeing him again because he’s my brother’s cat, but it was difficult.”

To no one’s surprise, a few of their pets are foster fails. Among the pets, the cats get along well with dog Cajun who, according to Steve “learned a looooong time ago to skirt around new cats of any age and not look them in the eyes when doing so.”

Introductions between the foster animals and Steve and Rosalie’s cats and dog is done very carefully. “I purposely installed a French door to the foster room and made a clip-on blind for it. When the foster animals are ready we can introduce visually through glass and then if things seem okay, ‘in person’ visits are allowed with supervision.”

The WHS acknowledges and appreciates the hard work and dedication of the Larocques. The Foster department said Steve and Rosalie “have left a remarkable impression on the foster community. They continue to impress us with their commitment to help anywhere that’s possible. If it’s going above and beyond for their foster animal or consistently keeping us updated on milestones that have the foster department celebrating with them. A hurdle they have been able to overcome was when a foster animal was diagnosed with Panleuk while in foster. Due to this diagnosis, they are unable to foster any cats or kittens that are not fully vaccinated. Despite this unfortunate news, this has not slowed them down as they continue to foster anyone they can and support us in new ways. We are incredibly grateful to have them as a part of our community and our team here might be just as excited as them for when they’re able to foster kittens again!“

A group of volunteers founded the Winnipeg Humane Society in 1894 and are vital to our success today! With the help of volunteers, we can provide care, love and attention to our four (and sometimes two) legged friends until they find their forever homes. The MVP (Monthly Volunteer Profile) recognizes the work and gets to know these special MVP’s in a spotlight each month that includes an article and photo shoot. MVPs receive a framed photo and gift card as our thanks!