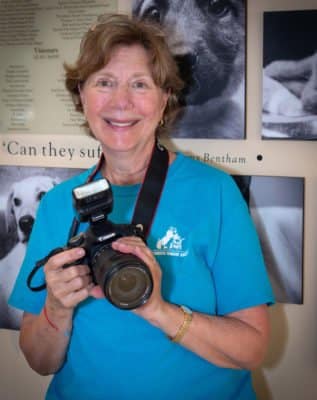 If you’ve had any interest in the Winnipeg Humane Society for more than the past two decades you may not have met Harriet Lyons, but chances are you’ve seen her work.

For 21 years Harriet has been a volunteer with the WHS, and most of that time has been spent as the animal photographer. Her pictures originally appeared in the Winnipeg Free Press. Now, with the growth of social media, her pictures appear online as well as on Facebook and Twitter.

Harriet started volunteering at the Humane Society because she’s always loved all kinds of animals. She’d spent some time initially working with dogs and cats at the old shelter on Kent. Then one day…

“My kids were grown and I had time on my hands,” Harriet explained. “A friend of mine and I had an idea so we went to see Kelle (Greene, Volunteer Services Manager). We told her we’d like to take pictures. They liked our idea. We were ‘hired.’”

She’s quick to note that a lot has changed since the early days of photo shoots. Initially, they’d borrow the WHS camera (which was not state-of-the-art, as one might expect from a non-profit organization) and get some film. Pictures were taken and then the film was dropped off at Wal-Mart for developing. “Then we’d hand off the pictures to the Free Press and they would choose the ones to go in the paper to show off some of the available animals,” she said. Nowadays, digital cameras let you take dozens of pictures from which you choose the right one.

With its many indoor and outdoor photo locations and natural lighting the Hurst Way location is more conducive for both animal care and photography, she added.

“At the Kent shelter you couldn’t take pictures inside because the kennels were not suitable for photos,” Harriet explained. “We would take the dogs outside to the big yard – winter, spring, summer or fall. We’d get the dogs to run around and once they sat still we’d take their pictures. A lot of patience was required”

“We had a lot of wonderful experiences there, working with many great animal handlers,” she said. “But on the other hand, once we locked ourselves out in -40 weather. It took a while to find someone to let us back in!”

One thing that hasn’t changed over the years is Harriet’s meticulous attention to detail and her need to get the ‘right shot.’

But sometimes this quest for perfection takes time – firstly to get the animal comfortable, and then to capture the expression on its face that’ll help it get adopted as soon as possible. “Sometimes it’ll take half an hour and other times I can tell Adele (Walker, who for the last ‘six or seven years’ has been the handler responsible for helping pose or hold the animals) ‘This is a one-shot cat. Perfect!’

“Sometimes when you go into the dogs’ kennels you can feel their angst,” Harriet pointed out. “You can feel that they’re very timid, that they’ve been through a lot. Sometimes taking the right picture can be quick but often we have to just sit there and let the dog come to us once he feels we’re okay. Some weeks we might be here four hours, but it’s worth every moment.”

Harriet and Adele use several ‘unconventional’ techniques to get the animals relaxed – or at least get their attention. “We often sing to the animals,” said Adele. “The cats are more responsive than the dogs. If a cat seems nervous, singing to it often calms it down. Often we’ll burst into some old song that pertains to the animal’s name.

“Harriet also knows how to make a lot of different animal noises to get an animal’s attention, “ Adele added. “She can bark like a dog and meow like a cat in addition to various other vocal noises she makes if her squeaky toy or her laser pointer doesn’t work.  This usually gets us laughing.  Sometimes the animals are impressed and sometimes they are not.”

Over the years she’s photographed thousands of animals with the help of numerous wonderful handlers. They were mostly dogs or cats, some gorgeous tropical birds, rabbits (whose character is hard to capture in a photo, both Harriet and Adele confess), hairless rats (not her favourite), at least one ferret and a degu.

Of all the animals she’s photographed over the years, one that she remembers well was Scooter. “He was part Dachshund, a long body with short legs. He was adopted by a truck driver. A perfect match!”

Harriet’s work is appreciated by employees and fellow volunteers. “I look forward to our time together,” Adele said. “We have a lot of fun. It’s a real pleasure working with Harriet and I feel very fortunate to be teamed up with her.”

A self-taught photographer, Harriet describes herself as a family historian who likes taking pictures but not necessarily being in them. She wants to keep doing this as long as she can, but admits that family (including five grand kids and two dogs aged 15 and two) can take up a lot of time.

She’s often asked by friends why she does this volunteering. “Isn’t this a difficult thing for you to do, to be there and see these animal without homes?’ they ask. “I tell them if I can be there and get the right shot, the innocence of that kitten or pup or capture the story of an older dog or cat in their eyes, that’s what I’m here for. It’s worth every heartbreak that I feel.  If I get the right picture then someone who is looking at the Internet and looking for an older animal or a pup or kitten. They’re going to see that picture and say ‘Let’s go see that dog. That dog needs us and our forever home.’ That’s why I do it.

“And yes, it’s hard, as anyone who works here or volunteers here knows. It’s not easy but we do it to get these animals to their forever homes, she explained. “I’m proud of what I do. I love what I do and I look forward to it every week.“