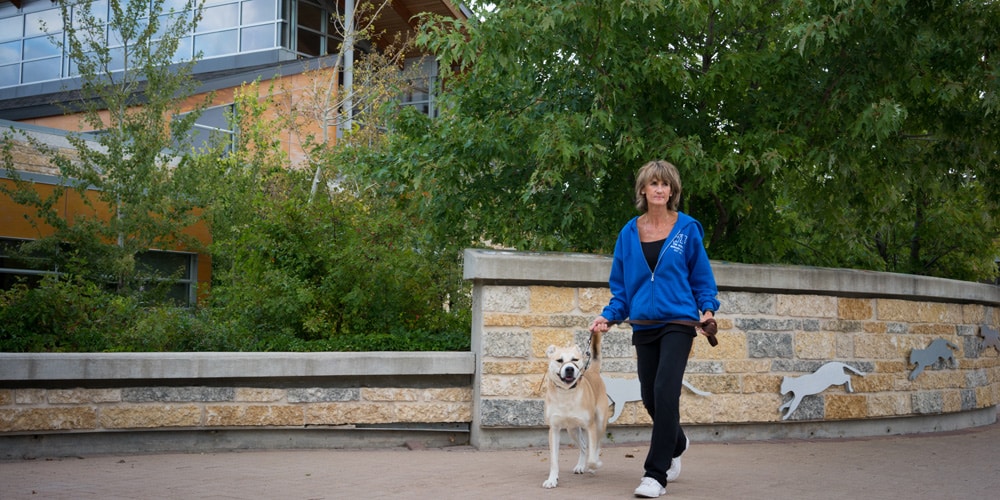 There are many reasons why someone would choose to volunteer their time to a given cause, but a life- 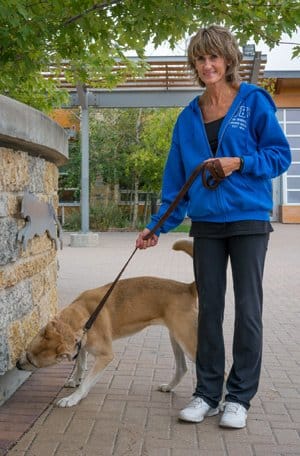 “I’ve had dogs all my life – usually two at a time – and my last one was 16 and it took me a year to get over that,” she explained.  “I love all animals but I’m a bit more attracted to dogs because of the unique bond that they have with people.”

Cindy started volunteering as a dog walker and customer service representative in mid-2011. She also tried other areas but found that she really enjoyed being hands-on with the dogs. So now she is a ‘yellow’ dog walker, which is the highest designation for volunteer dog walkers at the WHS. Cindy has the ability and experience to deal with dogs that do not handle being on a leash as well or exhibit inappropriate behaviours that need correcting.

In addition, she’s also a behaviour assistant. “The behaviour department has been really good,” she said. “They recruited me  two years ago and I have been working with them ever since. ”

Between the two roles, Cindy can be at the Humane Society up to four times a week. “I was going through a transition after I retired, so I spent a lot of time here,” she said. It’s a pace she’s maintained – in five-plus years she has put in over 1600 hours of volunteer time.

“I’m not one to sit still,” she laughed. “If I’m done everything I need to do at home I check the Volgistics (volunteer log-in) system and if there’s openings or I see a lot of cancellations I come in. I also find it easier to work with dogs if I have developed a good relationship – and that means coming in more often”.

Cindy also takes her work home with her, in a manner of speaking. She enjoys taking certain dogs on day  trips. “I don’t have any pets living at home because right now the timing is not right for our family due to travel,” she explained. “So I take designated dogs out of the shelter and it’s so rewarding to give them a break and to be able to work and play with them in the back yard and in the house to see what their behaviour is like outside of WHS. I report their behaviours back and the information all goes into their file, which helps give potential adopters more information.”

In one case, she added, she  provided relief  for a couple of weeks to a dog that had been at the shelter for more than 300 days  before the dog was eventually placed in a foster home.

“Not all volunteers can do that because they have pets at home. Luckily, I am in a position where these are my dogs for now and I love them all,” she said. “They’re all special in their own way.”

There’s a special fondness for those dogs that have been at the shelter the longest. “I spend most of my time with the long- 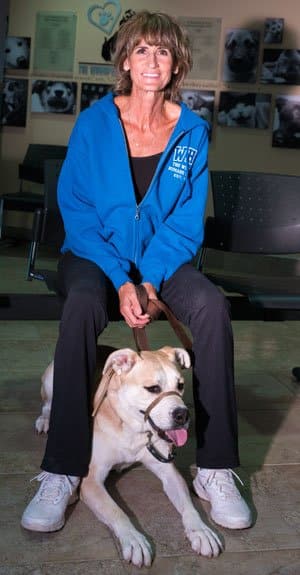 termers,” she said. “There’s about eight of them and I tend to keep my eye on those guys.

“With the long-term dogs especially, I’ll connect with the Behaviour Department on what they might need on any given day. I will sometimes take the dogs into the Joyce Gauthier Behaviour Centre and we’ll play ball or “find-it” or have them do puzzles and other games that stimulate their brains.”

There’s also a competitive fire burning in Cindy that fuels her commitment to the WHS. Volleyball is the reason for this competitiveness: Cindy was a volleyball player, both she and her husband Garth won three national university volleyball titles as players and he  is the long-time coach of the University of Manitoba Bisons volleyball team and two-time Olympian. Their son Dane played for the Bisons for five years and was a Team Canada athlete and their daughter Taylor, also holds a university title and is currently a member of Team Canada’s national beach volleyball team.

“Our family is very competitive,” Cindy laughed. “Sometimes everything becomes a competition, so it became a competition for me, telling myself ‘I can do this,’ so then I tried it and it was great. I learned a lot. I took some courses and the behaviour staff (she praised Catherine, Andrew, Lisa (now working in the development department), Sara, and Stephanie) trained me in a lot of areas. There’s always stuff you can learn and eventually I progressed to Yellow status and Behaviour Assistant.”

Her hard work and dedication has earned her the admiration of her peers. “I’ve always found Cindy to be friendly and cheery and more than willing to help out a new volunteer at the Humane Society,” said dog walker Glen Dawkins. “She’s very deserving of this MVP honour.”

She credits the people around her for making it so enjoyable. “The staff and volunteers here are awesome,” she said. “The animal care workers, adoptions staff, behaviour staff, clinic staff, and admin – they’re all just great! There’s a really good community of people here with all the volunteers. I love it. I’m going to keep doing this.

“I believe in community service,” she concluded. “I wish everybody could do something somewhere. Could you imagine if everybody could volunteer two hours a week somewhere? It’s not much time and there are so many places that could use a hand.”