Many dogs, along with their owners, have volunteered their talents.   I would like to nominate Abbey for the monthly volunteer profile (MVP) and a representative of all our wonderful WHS dog volunteers.

Abbey was born November 2011 in The Pas, and, along with her mother and seven litter mates, was transferred to the Winnipeg Humane Society when just a few days old.  After a time in foster, Maxine was placed for adoption and discovered by Jill Bristow during a Puppy Promotion Event.  Maxine officially became Abbey and was adopted by Jill on January 25, 2012.  Unknown at the time, it was just the beginning of a volunteer journey for this dynamic duo!

Abbey is an official WHS ambassador.  She represents the WHS at various meet and greet events.  Abbey is one of the few ambassador dogs who is an actual alumnus of the shelter, and who wonderfully exemplifies how great a shelter dog can be.

Abbey has taken part in six Paws in Motions events.  Considering Abbey is 6 years old, that means she has been involved all her six years in raising money for the WHS!  This year Abbey was part of the Foster Team, which came in 4th place in all-around fundraising.

Further to fundraising, Abbey won a contest which featured her in the shelter’s 2014 calendar as January’s Pet of the Month.  Way to go Abbey!

Abbey has made 15 donations to the Canadian Blood Bank and has earned the Golden Tag recognition.  Recently Abbey was diagnosed with a low-grade mast cell tumor in her wrist.  The good news is she has received surgery, and her prognosis is excellent.  This means she has been eliminated from further donating blood. 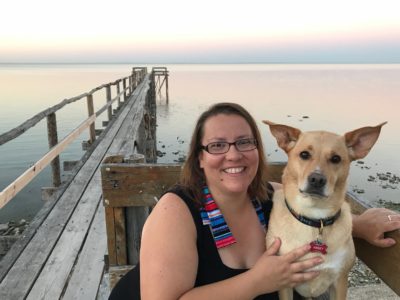 Abbey’s star shines brightest as a surrogate foster mother.  Her nurturing and patient nature have provided a safe haven for more than 120 vulnerable kittens as they have transitioned from mother to foster to forever homes.  It’s not unusual to find a kitten or two snuggled into the warmth of Abbey’s fur, or an entire litter sharing her dog bed.  Abbey also helps with washing kitten faces after they have eaten, a motherly task I’m certain Abbey enjoys best!  Although already adorable, kittens socialized by Abbey may be considered more adoptable, particularly by families who have a dog.  Abbey has known many foster kittens over the years, but she has especially bonded with one, who became what is known as a foster fail.  Oliver and Abbey are now permanent roomies and the best of buddies.

When asked what Abbey has meant to her, Jill Bristow also a WHS volunteer, teared a little and responded, “Abbey is my buddy, my sidekick, my constant companion.”

They share a great life with daily walks to various parks, road trips, visits to the dog beach, play dates with dog buddies, and, most recently, a night at the Fairmont Hotel where both dog and owner were pampered and treated royally by staff. 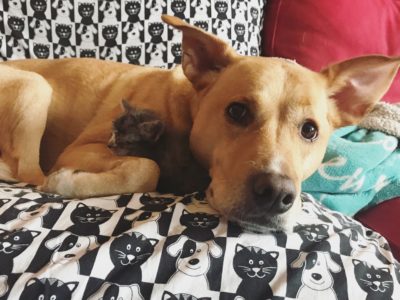 So, here’s to Abbey, and a most grateful thank you to Jill, who has shared her amazing dog with us.  And, here’s to the many amazing dogs, who, like Abbey, have contributed to the WHS in so many special ways.  To name just a few:

– Poppet & Smoothie have shared their home and yard with shelter dogs who need more advanced guidance and training before they are ready for adoption.

Thank you to the many incredible dogs and their awesome owners who have made valuable contributions to the WHS and continue to do so!