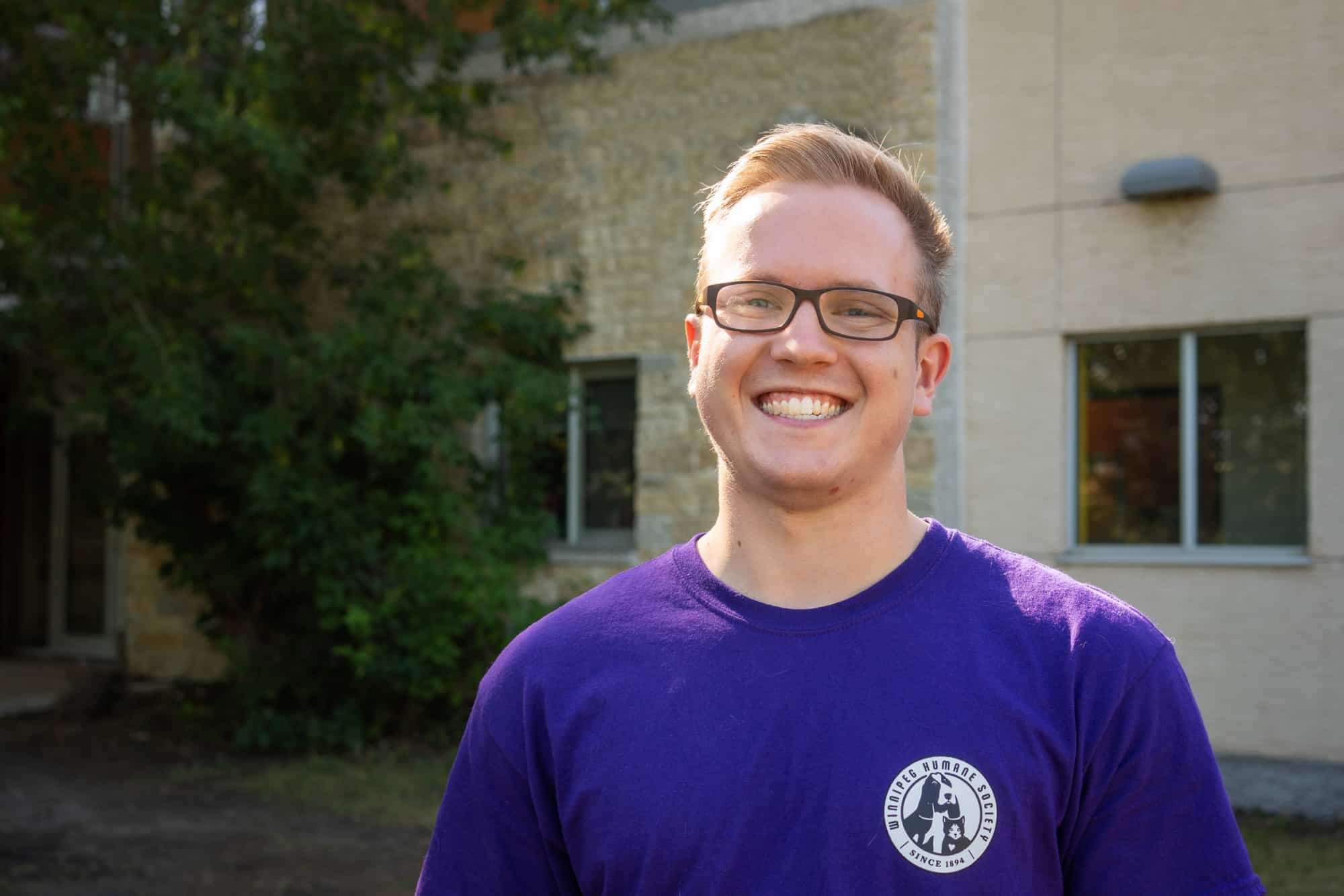 Winnipeg Humane Society volunteer Timon Kozelko is a big believer in the concept of paying it forward for good deeds. And he follows that idea in both working and volunteering.

“When I was younger, since I have autism, I was unable to grasp social skills until I was about seven or eight,” he explained. “My cat at the time, Sebastian, was such a big part of changing me to get me where I needed to be. It was such a comforting thing to come home and have my cat on my bed. When the days were tougher I had that comfort and joy with him.”

“When I became eligible to volunteer at the Humane Society, I really wanted to do it because pets have always been such a big part of our family’s lives. They’ve done so much for us that I wanted to pay it forward at the place where we’ve gotten most of our pets over the years.”

Timon’s quick to point out that the family has had both pet dogs and cats over the years. “No biases at our house!” he laughed.

“When I was younger I had an EA who assisted me,” he pointed out. “So I thought I would pay it forward. I really enjoy it because in a way it’s kind of the same thing with the cats – the joy of working with the students one-on-one, watching them grow into fine young people.”

Timon started volunteering with the WHS in 2016. He spent the first two years as a volunteer in the back room, working with the cats, getting them ready for adoption. After about two years he decided to try something a little different – working with the shyest cats so they can get adopted. He became a Feline Behaviour Assistant.

This summer marked Timon’s five-year anniversary with the Winnipeg Humane Society. “It was kind of a fitting moment,” he said. “The shelter hasn’t been open to visitors since COVID began until July, and that’s when I had my anniversary. It was fitting that on the month of my fifth year of service I got to come back and volunteer again. It kind of marks a return to normalcy.”

He’s helped out with special events, like Paws in Motion, the Bow Wow Ball and the Used Book & DVD Sale but most of his volunteer time has been spent with cats. He’s never volunteered with dogs. “No biases at home, but when I’m here I love my cats,” he pointed out with a chuckle.

Timon has a great deal of admiration for all the staff and volunteers at the Humane Society. “My favourite part of being here is seeing the amount of hard work that goes into making the Humane Society the great place that it is – from the staff, the volunteers, the veterinarians, the clerical staff,” he said. “Everybody’s involved. I get to walk in and for two hours I get to witness the amount of passion and care that go into working there. The animals are important, but my favourite part is seeing everybody’s commitment to make things even better.”

Timon is especially appreciative of the help and guidance he’s received from Volunteer Services in his five years at the WHS. “they’ve been very patient and understanding of where I needed to be as a volunteer and very open to me asking questions, so I could make sure I was doing things the proper way,” he noted. “Kelle (Greene, Volunteer Services Manager) is very hard working and compassionate about everything she does. Amy (Brake, Volunteer Administrator) is awesome, too.”

Will Timon continue volunteering to celebrate his tenth anniversary (or more) at the Winnipeg Humane Society? “There’s no shortage of things to do around here,” he said, with a smile.