The Winnipeg Humane Society is working to eliminate practices which cause farm animals distress and suffering by educating consumers, lobbying government, and consulting with farm groups. 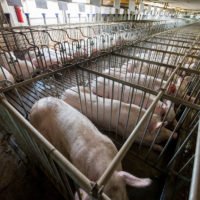 Factory farms that use intensive confinement systems deny animals many of their most basic behavioural and physical needs. Either through confinement in cages or overcrowding in feedlots and pens, the animals aren’t able to interact socially in a normal manner. These unnatural conditions often lead to aggression amongst the animals, as well as boredom, frustration and stress.

The livestock industry often claims that these animals would not reproduce so well if they were stressed. However, we can look at puppy and kitty mills to see that this logic isn’t true. As well, drugs and hormones are routinely fed to these animals to combat the potential for disease outbreak, which is a much higher risk with so many animals so closely confined. These drugs are also given to speed up the animals’ growth.

90 percent of pigs in Manitoba are raised on factory farms, crowded into pens with no straw for rooting in or nesting.