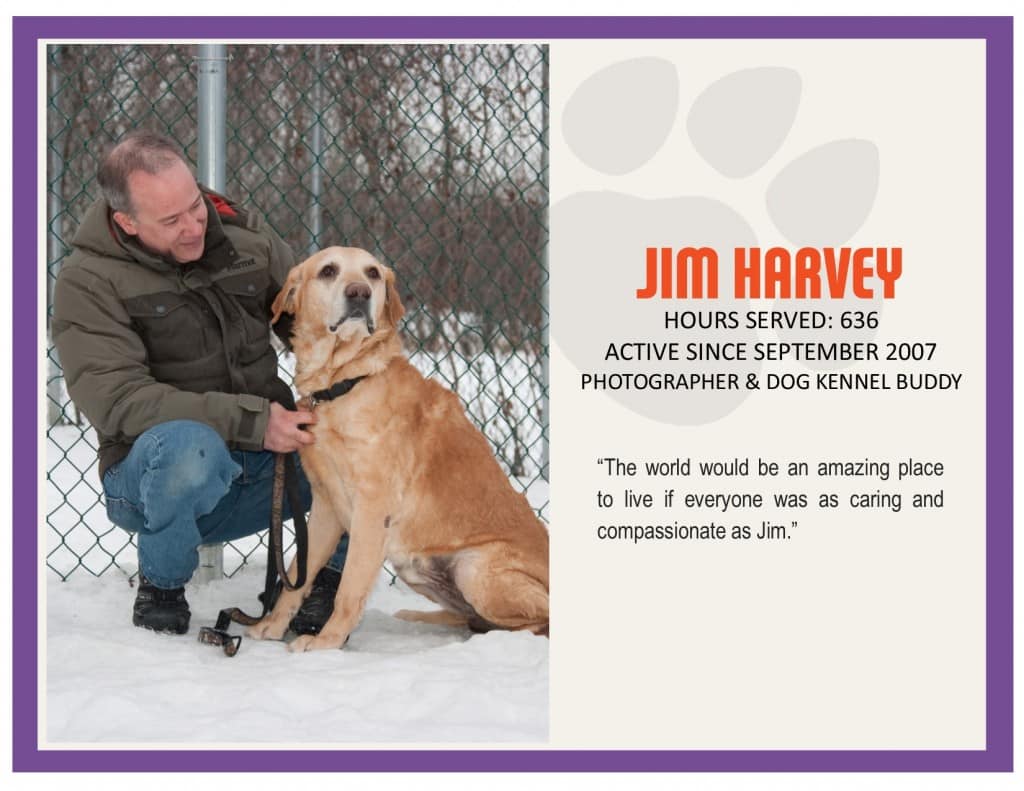 Jim Harvey admits it was the most challenging project he’d worked on in his nine years volunteering at the Winnipeg Humane Society. Last September, he took 50 pictures of animals for use as table centrepieces at the annual Bow Wow Ball. Not only would his work grace the tables but his pictures were also used for a slide show playing throughout the evening.

As anyone who has ever tried taking pictures of their family pet can attest, it is challenging to say the least.

“With dogs, you’re fighting to get their attention away from you because when you go into the kennel with them and they’re totally excited they want to jump all over you,” said Jim, a 51-year-old software developer. “You have to make yourself boring so that they will settle down. But with the cats, it’s the total opposite.

“You’re trying to get their attention because you want the dog or cat to be looking right into the camera. It was very specific what they were looking for.”

The project went off without a hitch.

“It was a challenging deadline and a challenging project,” he said. “But I think of every project I’ve done, that’s been the most satisfying in terms of the end result.”

Jim started his volunteer experience at the Winnipeg Humane Society as a dog walker. He and his family said goodbye to their dog a few years earlier and he missed being around the animals. He thought volunteering at the WHS could satisfy that need.

After six years as a dog walker, he found out that they were looking for volunteers to work with the dogs in the back area. “I thought it would be a nice change,” said Jim, who still works as a dog kennel buddy every Tuesday evening.

While working as a dog kennel buddy, Jim would take the odd picture of dogs he recognized in adoptions that were previously in the back area. He thought the pictures looked good so he sent them to Kelle, the manager of volunteer services. Jim’s photographs were noticed by the shelter’s communications team and wanted to showcase his talents.

“That got me on the path to photographing animals at the WHS along with other special projects,” said Jim, who has been interested in photography since 2011-12.

“Not only is he a committed and dedicated volunteer, but he also goes above and beyond for our staff by using his passion and hobby as a photographer to take photos of the animals in our care,” said communications coordinator Kyle Jahns in nominating Jim as an MVP. “Not only that, but he also has written some of the most raw and beautiful blog posts about his experience as a volunteer that truly capture his love for dogs. The world would be an amazing place to live if everyone was as caring and compassionate as Jim.”

As one of the WHS’s resident photographers, Jim also takes the photos that appear with the MVP profiles.

“That’s been an awesome project because I find it so inspiring,” said Jim. “You get to meet all these different folks who are giving their time and giving of themselves to all the animals.”