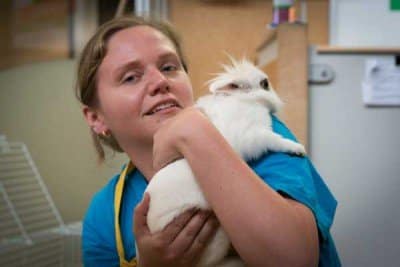 Karen Vincett never had a pet growing up in North Kildonan, so when she began volunteering with the Winnipeg Humane Society (WHS) in July 2015 she had no pre-conceived ideas about what area would be best suited for her.

She chose rabbit wrangling and has never looked back.

“I have always wanted a pet and never had one as a kid,” she laughed. “My parents said ‘no’ because they felt that they would be the ones taking care of it instead of me or my brothers.

“My family suggested I try volunteering here to give me a chance to work with the animals, and it went from there.”

Describing herself as ‘not much of a cat person,’ Karen decided she would work with the rabbits and guinea pigs after hearing that dog walking positions fill up quickly during her orientation. It was a decision she has enjoyed.

“Rabbits are not necessarily affectionate like cats or dogs,” she said. ”So maybe they’re not

as popular for pets but the longer that they are here the more you do get to know their personalities. It’s kind of tough sometimes seeing ones who are here week after week but you develop a relationship with them.”

Karen’s volunteer work with the WHS was recently recognized by her employer, Great-West Life. The insurance company encourages employees to become involved in their community by offering grants to eligible charities. The WHS recently received a $1000 award from Great-West Life after reading Karen’s application.

Like most WHS volunteers, Karen enjoys interacting with the animals and with people visiting the area. “I like helping our visitors determine which rabbit would be the best pet for them,” she said.

Karen’s enthusiasm and caring is not lost on staff and her fellow volunteers.

“I would like to nominate the ‘Bunny Girl,’ Karen for MVP,” volunteer Liane Murphy’s said in her nomination of Karen. Liane, who normally spends time with the cats, started visiting with the bunnies and Karen in the critter area. “We talked about the rabbits and the people who come looking for pets.  She is always friendly and welcoming.”

Liane added that Karen has volunteered over 120 hours in her first year, mostly with the rabbits but also assisting with the WHS Bow Wow Ball.

The rabbits are usually pretty easy to take care of, but sometimes they can “get a bit jumpy,” Karen said. “Last year on the pictures with Santa day there were a lot of people walking around with their dogs that had been brought in with photos. The rabbits get used to a certain level of noise and with more dogs in that day the barking made them a bit nervous.”

Has Karen ever thought about taking her volunteer work home with her, i.e. adopting a rabbit?

“Yes I have thought about it but right now my place is not pet-friendly,” she noted. “I wouldn’t mind one in the future. They’re fairly independent compared to cats or dogs. They’re pretty quiet mostly. They just want to be fed and to get a bit of exercise.“